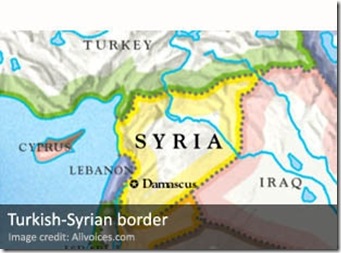 A Turkish newspaper has retracted a report stating that Turkish military jets entered Syrian territory and destroyed an outpost belonging to an al-Qaeda-linked rebel group, after its members attacked a Turkish military garrison along the Syrian-Turkish border. In a published correction, the paper said instead that the Turkish army opened fire from inside Turkey. Today’s Zaman, the English-language edition of Turkish daily Zaman, reported on January 29 that Turkish F-16s had entered Syrian territory and had bombed a stationary convoy of vehicles belonging to the Islamic State of Iraq and Greater Syria, or ISIS, an al-Qaeda-linked group that made its appearance in Syria in April of last year.

The origins of ISIS are in Iraq, where it was founded in 2003 as a Sunni armed paramilitary force, in response to the invasion by the United States. In 2004, the group pledged allegiance to al-Qaeda and Osama bin Laden, and changed its name to Al-Qaeda in Iraq (AQI). Many observers argue that, in recent months, ISIS has turned into “one of the most powerful forces on the ground” in Syria, with 7,000 well-armed fighters, many of whom are battle-hardened foreign Islamists.

It is widely believed that ISIS now dominates Syria’s northwest, having established outposts in a series of “strategic towns” in the region, which are referred to by its leaders as “mini emirates”.

Through these outposts, ISIS fighters are able to monitor border traffic between Syria and Turkey, and effectively control most border passages. After retracting its earlier report, Today’s Zaman said the Turkish military used “tanks and artillery fire” to attack the ISIL outpost. The latter consisted of “a pick-up truck, a lorry and a bus” all of which were destroyed in the attack, according to the report. The cross-border attack was allegedly in retaliation for a mortar shell, which was fired from Syria last Tuesday, and fell inside Turkish territory. It is believed that the shell was fired during an armed clash between ISIL and forces belonging to the Free Syrian Army, which is the armed wing of the Syrian National Council —Syria’s largest anti-government coalition. Zaman’s earlier report had stated that Turkish jets attacked the ISIL outpost after al-Qaeda-linked militants had “opened fire on a military outpost”. There were no reports of ISIL casualties during the attack.