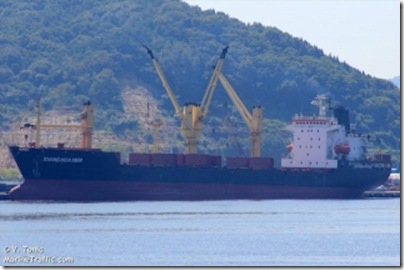 Just hours after Panama-flagged cargo ship XIANG HUA MEN was hijacked by pirates 14 nautical miles off the Iranian coast, Iranian commandos stormed the vessel, rescuing the 28 Chinese crewmembers and capturing the nine pirates on board.

Two Iranian naval vessels approached the ship, following which the pirates threw their weapons overboard. Xinhua news agency reported that the Chinese embassy in Iran had requested that Iran intervene militarily to free the vessel.

Somalia Report can confirm that Garaad, a well-known pirate based out of Puntland was one of the nine pirates arrested. Somalia Report spoke with Garaad’s cousin this morning, who stated that Garaad was one of the nine pirates arrested. Garaad was responsible for the Blida hijack, which was subsequently released for $3.5 million. His gang has come under pressure from Puntland security forces recently: in February, a number of his colleagues were arrested, and the authorities burned two of their speedboats.

The sugar-laden vessel has resumed its voyage to Iran. The Xiang Huamen had departed from Shanghai, and was heading towards Imam Khomeini port in southwest Iran. The general cargo vessel is owned by Nanjin Ocean Shipping Company, out of Nanjing, China.

Garaad and his pirate crew left Harardhere, in Somalia’s Mudug region, in late March in search of targets. Garaad, in his early 40s, was born in Harardhere, became a pirate in early 2001 and has routinely escaped arrest attempts by Puntland security forces, including a raid in November of last year. Trained in 1999 as a marine in fisheries protection by the British security company, Hart, and a former soldier, Garaad is a skilled mariner.

If convicted, this marks a significant blow to Somalia piracy, particularly for younger pirates who viewed the highly skilled Garaad as invincible.

This is the second such incident this week. On Tuesday, the Iranian navy freed hijacked vessel Eglantine, and arrested the thirteen pirates on board. Iranian news service Fars quoted Iran’s navy commander, Habibollah Sayyari as saying “A ship carrying thousands of tonnes of goods to Iran was attacked and hijacked on March 29. Pirates wanted to take the ship to Somalia, but our forces reached the hijacked ship in the shortest time possible, and after 48 hours of intensive fighting… they were able to arrest the 13 pirates and free the crew.”

Due to favorable weather conditions, pirate attacks is expected to remain frequent during the month of April.