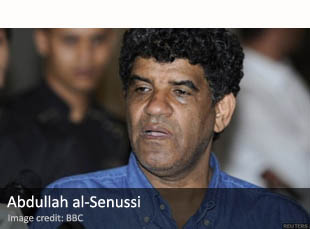 By JOSEPH FITSANAKIS| intelNews.org |
The arrest of Muammar al-Gaddafi’s spy chief in Mauritania last week was the culmination of a carefully planned French intelligence operation, which was secretly aided by the Mauritanian government, according to informed insiders. Abdullah al-Senussi, Colonel Gaddafi’s brother-in-law, who used to head the Mukhabarat el-Jamahiriya, Libya’s intelligence agency, was captured at the Nouakchott International Airport in the Mauritanian capital on March 17. He was detained as soon as he arrived there on a chartered flight from Mali. He had previously entered Mali from Niger, and was reportedly under the government’s protection. But the ongoing uprising of the pro-Gaddafi Tuareg in the north of the country, which has now resulted in a military coup in Bamako, caused the former Libyan spy chief to seek refuge elsewhere. According to a well-researched article by Reuters news agency, al-Senussi was gradually convinced to travel to Mauritania by the al-Me’edani clan, a pro-Gaddafi nomadic tribe that had previously worked for the Libyan security agencies and whose members had been given Libyan nationality by Colonel Gaddafi’s regime. The clan, says the Reuters article, was persuaded to turn its back on al-Senussi as part of a behind-the-scenes agreement between French and Mauritanian intelligence agencies. The deal was struck after a high-level agreement between the Nicolas Sarkozy government in Paris and the Mauritanian government of President Mohamed Ould Abdel Aziz. A career soldier and high-ranking officer, Abdel Aziz assumed power in the country in a 2008 military coup that was widely condemned by international bodies, including the United Nations. But the military regime in Nouakchott was pleased to see Paris engineer a thaw in relations between the two countries in 2009. Ever since then, the French government has publicly praised the regime of President Abdel Aziz as a “key partner” in combating terrorism. Mauritania’s decision to help France capture al-Senussi was a repayment to the country’s former colonial master for its support after the 2008 military coup, according to Reuters. Following his arrest, al-Senussi is believed to be held at the headquarters of the Mauritanian intelligence service in Nouakchott. The question, of course, is who will get hold of the former Libyan spy chief, who is currently claimed by both Libya and France. According to an anonymous “senior Arab intelligence source” quoted by Reuters, French President “Nicolas Sarkozy will not be able to sleep in peace until he gets Senussi into France”. The reason is that al-Senussi is believed to be in the know about the alleged financing with €50 million of Mr. Sarkozy’s 2007 election campaign, by the Gaddafi government. The article cites “intelligence sources” who claim that Sarkozy is trying desperately to bring al-Senussi to French custody, in order to “prevent a public trial” that might reveal the bankrolling of his election campaign by the Libyans.