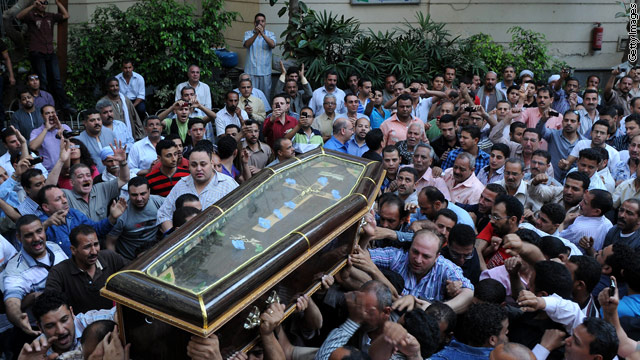 Egyptian Coptic Christians carry the coffin of a victim of sectarian clashes during a funeral in Cairo on May 8, 2011 as Egypt’s military rulers warned they will use an ‘iron hand’ to protect national security after clashes between Muslims and Christians in the Egyptian capital killed 15 people and injured scores.

El-Katatney: Protests continue, Egypt’s revolution has cost $3.5b so far and ‘we’re beginning to lose sight of the big picture’

She has worked as a staff writer at Egypt Today, the leading current affairs magazine in the Middle East, and at its sister magazine Business Today Egypt. She has also been a contributor at Muslimah Media Watch, a website that critiques how Muslim women are represented in the media and popular culture. (More biography below.)

Senior International Correspondent Ben Wedeman reports that there were some 10,000 demonstrators between Cairo’s landmark Tahrir Square and the Egyptian State TV building. (8:40 am ET)  The group was divided into three separate protests: around 7,000-8,000 people are gathered in central Tahrir Squareto rally in support of the Arab Spring and the Palestine. The protesters waved flags of other Middle Eastern nations and chanted “Egypt and Palestine are one hand.” The second group of demonstrators in the Tahrir Squarearea called for unity among Egyptians and a return to the ideals of the Jan 25th revolution. Another group of demonstrators gathered in front of the Egyptian State Television building in Maspero called for greater rights for Egypt’s Coptic Christian minority.

Here’s our blog interview with El-Katatney:

Another Friday, another “million man march” and the rally had been labeled as the “Day to Purge the Remnants of the Mubarak Regime from Egypt.” What ‘remnants’ are activists talking about and what, in your view, is the possibility that they will actually be purged?

I think it’s hilarious how the word ‘remnants’ (folool) has suddenly because the ‘it’ word. I had literally never heard of it before and now I hear it dozens of times a day.

It would be naive of us to assume that there aren’t many, many Egyptians who stand to benefit from keeping the status quo as it is—and many who don’t, but still do support ex-President Mubarak. My team and I have been covering not just protests calling for the trial of Mubarak, but protests calling for him to not be tried or punished.

Personally I feel that the multitude of protests now takes away from their impact. I fear that protesting about everything (“Cold coffee in your office? Go protest!” joked my taxi driver) will mean protests end up being symbolic, nothing more.

At this point many protests are more about letting off steam, rather than legitimately focusing that energy into working. A protest calling for the sacking of a certain figure, I understand: we can see that happen. But a protest calling for the removal of people we can’t track and don’t know who they are or what exactly they’re doing?

I am at the march: Turns out it’s a Friday of solidarity “we’re all one’ that kind of thing.

After the fatal clashes between Salafi Muslims and Coptic Christians last Saturday—15 people killed and more than 200 wounded–Egypt’s justice minister warned that those who threaten the country’s security will face “an iron fist.” On Wednesday, the government formed a national justice committee to draft new laws to deal with sectarian violence. What’s going on?

I definitely think it is simplistic to say that recent events can simply be attributed to sectarian tension; the situation is so much more than that. I would call it a combination of sectarian tension, media fear-mongering, religious ignorance, and thugs hired by folool (the aforementioned ‘remnants’) who have much to gain by directing people’s attention to an immediate problem and away from other issues.

There has to be a bogeyman. That’s just the way it’s always been. America’s bogeyman was Osama Bin Laden. He’s gone now, but it won’t be long before a new one is ‘made.’ Egypt’s bogeyman was the Muslim Brotherhood, a reason for Mubarak and the National Democratic Party to have a legitimate excuse to the outside world (i.e. the US) of why we still had the emergency law.

What better bogeyman now than an even scarier one? The fundamentalist Salafis. A way to reinforce the outside world’s fears that a true democracy would mean that scary fundamentalists would end up in charge. So don’t support the Arab Spring–look what will happen when you do.

The role of the media in inciting hatred towards Christians in Egypt has long been documented, and my team and I have also covered several protests at the Egyptian Radio and Television Building protesting against coverage of Christians.

I also believe that sectarian tension is also due to the fact that a true understanding of Islam and its values has slowly eroded. Muslims and Coptic Christians in Egypt have a long history, and it’s only in the last half a century that things started going wrong. The poet Khalil Gibran once said: “Pity the nation that is full of beliefs and empty of religion” and that’s what I feel Egypt is like today.

Whether it was fundamentalist extremists or paid thugs who are to blame for recent events, there’s no denying that Egypt has a long way to go when it comes to accepting the other and coexistence.

Egypt’s leadership wants to improve relations with Hamas, the militant group that controls the Gaza Strip. Egypt supported the reconciliation agreement between Hamas and Fatah concerning an independent Palestinian homeland. And Cairo also wants to restore diplomatic ties with Iran. From your point of view, what goal does Egypt have with these moves?

When it comes to Palestine, I think Egypt’s always had a consistent strategy. Tahrir Square right now is plastered with “Third Palestinian intifada (uprising)” signs, with a march planned for the 15th of May to Gaza—I have friends who left for there today.

As for Iran, there’s really only one word: self-interest. The GCC (Gulf Cooperation Council) is considering accepting monarchy-ruled countries Morocco and Jordan into the fold. It’s obvious why. Now, think what it would mean for Iran and Egypt to be closer, and then you better start to understand (what I believe) are Egypt’s motives. Basically, pressure that would result in (ideally economic) actions taken to benefit the country.

It’s also worth mentioning that there are talks that the US could cancel $1 billion of Egypt’s $3.6 billion debt, but nothing concrete. Saying we want to restore diplomatic ties with Iran might help speed up that decision.

On Thursday, Abdel-Moneim Abul-Futuh, a senior member of the Muslim Brotherhood, announced that he would run for president. Apparently, there is now a long list of candidates, one which includes outgoing Arab League Secretary-General Amr Moussa and Mohamed ElBaradei, the former chief UN nuclear inspector. The elections are scheduled for late November. How are the campaigns going and are citizens paying a lot of attention to the various candidates?

I’ve been lucky enough to be able to hear a number of the presidential candidates speak in person, and my team has interviewed several of them, including the (so far) only female to announce she would be running.  Yesterday I met El-Baradei and a couple of days ago I interviewed Khairat El-Shater, the deputy chairman of the Muslim Brotherhood. (He made sure to stress that the party itself is not supporting any candidate—Abul-Futuh is running as an independent).

In my personal opinion, unfortunately none of the candidates themselves has really gotten on the campaigning bandwagon. We don’t even really have an understanding of what lobbying or campaigning is, simply because our political system stunted any growth in that direction. Every day, new parties and new candidates come out of the woodwork.

Egyptians are getting bogged down in a lot of side issues and tangents, and we’re beginning to lose sight of the big picture. Ask anyone on the street about a certain candidate’s program and almost 100% will have no idea.

“Egypt is running out of food, and, more gradually, running out of money with which to buy it. The most populous country in the Arab world shows all the symptoms of national bankruptcy – the kind that produced hyperinflation in several Latin American countries during the 1970s and 1980s – with a deadly difference: Egypt imports half its wheat, and the collapse of its external credit means starvation.”

Are you and those you know sensing a country that is going broke?

People simply don’t want to believe it. Every day the papers talk about billions stolen by former ruling members of the regime, and many believe this money will somehow make its way down to them. The trickle down approach never worked before in Egypt, and I highly doubt it will work now. And even those who are vaguely aware that we’re heading for a catastrophe are nonchalant about it. I’ve had people tell me “we were poor before, and we’re poor today. It doesn’t really matter to us.”

But the situation has the potential to turn very bad, very fast.

The finance minister just announced yesterday that the revolution so far has cost Egypt LE 20.5 billion ($3.5 billion). It breaks down this way–LE 13.5 billion ($2.2 billion) in the tourism sector and the rest were costs incurred by the Treasury. He also mentioned that Egyptian exports have dropped 40% and that manufacturing is operating at 50% of capacity.

In 2008, we had a bread crisis. Fights broke out in queues for bread, and people died. I remember interviewing people in a bread line outside ofCairo, and I saw a woman so old she was hunchbacked. She told me she had hitched a ride on a lorry from a village an hour away because the lines here were shorter. I asked her why none of her family members could come instead of her and she said the lines took too long and they had school or work. I asked her how long she’d been standing in line in the hot sun. She said six hours.

I never want to see that again.

MORE BIO: El-Katatney’s story, The Business of Islam” won the Economics and Business award in the CNN MultiChoice African Journalist of the Year 2009 award, making her the first Egyptian to win one of the prestigious awards. In 2009 she was also awarded the Anna Lindh Euro-Mediterranean Journalism Award by Prince Albert III in Monte Carlo for her story “Identity Crisis 101. Her first book, “Forty Days and Forty Nights in Yemen,” was published in London in May 2010. In May 2011, she will graduate with an MBA and an MA in television and digital journalism–both from the American University in Cairo.
Read more: